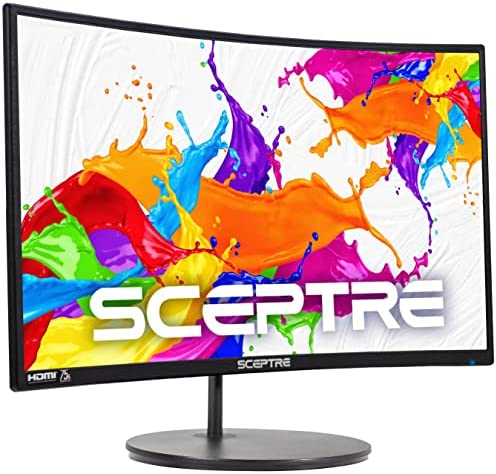 If you’re on a tighter budget but still want a well-performing medium-sized monitor, the Sceptre E248W-19203R  is an excellent option. The metallic thin-bezel design provides a smooth viewing area, allowing for the side-by-side placement of two or more displays.

Still, for the same or slightly more money, you can get the HP VH240a, which has a superior IPS panel, ergonomic adjustments (height, tilt, and pivot), and more functions.

The Sceptre E248W-19203R  is a sleek addition to any workstation thanks to its silver metal cabinet and thin bezels. It’s the second monitor we’ve seen in this price range to use metal for its construction; several models costing almost twice as much still use outmoded plastics. The stand for the cabinet consists of a spherical base that has been stabilized.

It has five tiny buttons on the rear for various functions. The power button, which can be seen as a series of tiny white dots from the front, is situated near the right bezel. When the monitor is attached to a wall using the VESA mount, the buttons become unusable due to the lack of labels. You can’t modify the stand’s height, and you can’t turn it into a portrait orientation, either.

It has a VGA connector, two HDMI ports, a headphone jack, and an AC power jack on the back of the cabinet. While more costly gaming monitors, such as the Asus ROG Swift PG258Q, have extensive six-color customizations, the On-screen menu provides various visual options. Since the other alternatives are either too dark or too bright, the Standard setting provides the best overall picture quality.

High static contrast ratios (3,000:1 in the case of the Sceptre E248W-19203R ) are made possible by the monitor’s VA (Vertical Alignment) panel. This results in highly dark blacks, which enhances the picture’s realism, particularly in low-light settings.

And while its maximum brightness of 250 nits is low compared to today’s LED-backlit displays, it’s pretty bright for most environments.

Screens may not be able to effectively reduce glare if they are placed in highly bright rooms or near windows without blinds or drapes.

Regarding color reproduction, the Sceptre E248W-19203R  monitor supports 95% of the sRGB color space; sRGB is the most popular color space. Therefore most web material and games will be shown correctly.

You won’t notice the difference between 95% and 100% sRGB gamut coverage if you’re not performing professional color-critical work. However, VA screens are not appropriate for this application because of their limited viewing angles.

Although the viewing angles are far better than those of TN panel monitors, there is still some gamma and saturation shifting that occurs when looking at the screen from an angle. It’s not a big deal for playing games or watching movies, but an IPS monitor is recommended for consistent, professional-quality color accuracy.

The Sceptre E248W-19203R  has a color depth of 16.7 million (6-bit + 2-bit FRC) thanks to temporal dithering. This can result in a 30Hz flicker, but because it’s difficult to see until explicitly looking for it in test patterns, most users won’t be affected by it.

The screen resolution of this monitor is 1920×1080, making it a Full HD display. The resulting pixel density is 92.56 PPI on its 23.8-inch display (pixels per inch). You’ll be pleased with the size of the display area and the clarity of the text and images.

The Sceptre E248W-19203R has decent, but not great, out-of-the-box color accuracy. Even if the red and green colors may not perfectly align with their ideal coordinates when shown on a computer screen, the image nevertheless seems acceptable to the untrained eye. However, the panel can produce rich, well-saturated colors and did a fine job displaying Blu-ray sequences from Damien Chazelle’s La La Land.

The grayscale performance is likewise respectable, though it cannot match the level of detail provided by high-end IPS panels like the one found on the BenQ BL2420PT. If you’re looking for a 24-inch monitor, this one has decent viewing angles (not the finest, but still serviceable) with minimal color change across the board.

Although some latency is seen in newer games at high resolutions, the panel does a decent job of portraying fast-moving things. The monitor’s input latency (how long it takes for the screen to respond to a controller instruction) was measured at a respectable 12.8ms, placing it close to its rivals.

The 5-millisecond (gray-to-gray) pixel responsiveness and 75Hz peak refresh rate of the screen aren’t excellent for gaming but aren’t the worst, either. The PC version of GTA V and the Xbox 360 version of Fallout have encountered screen tearing issues.

Even with the arrival of Pascal-based NVidia GeForce GTX 1080 Ti graphics cards, many gamers will still have difficulty finding visual solutions to accommodate 5K gaming. The Acer Predator XB271HK has several great features that will please gamers and are a great choice if you need a reliable gaming monitor.

The panel has an input latency of 12.8 ms (how long it takes the monitor to respond to a controller instruction), which isn’t terrible but is still worse than the average of 10.6 ms for cheap displays. As of now, the Benq SW2700PT has the quickest response time at 9.5 ms.

Monitor power and four OSD menu navigation hotkeys are located on the right side of the monitor’s rear bezel.

The interface is straightforward and offers a wide range of customization options, from the usual white balance, contrast, and temperature sliders to more sophisticated ones like gamma, sharpness, and 6-axis hue/saturation sliders.

Other calibrated image settings can also be chosen (User, Standard, Movie, Eco, FPS, and RTS). However, we recommend sticking with the User option and fine-tuning the brightness to your taste.

The monitor’s lighting doesn’t flicker, and there’s a built-in low-blue light filter (called “Blue Light Shift” in the settings), so you may use it for long periods without experiencing headaches or eye strain if you take frequent rests.

If you’re a gamer, you should get a 144 Hz display. By checking out our buyer’s guide, you may get the greatest monitors for less than $150.

The ASUS VA24DQ is an excellent alternative to a 144Hz monitor if you don’t have the money or the computer power to use it. It features an IPS screen and a quicker reaction time speed. It also features a DisplayPort connector, so you can use FreeSync on GeForce GPUs that are compatible with it.

Since the VA24QD’s IPS screen provides superior color accuracy and consistency, we reiterate our recommendation that you use it for whatever content production you may have in mind.

If you prefer watching films or playing graphically intensive games in a dark setting, the E248W-19203R is a better option than the IPS models because of its high contrast ratio. Remember that the AOC C24G1, a 24″ curved 1080p 144Hz VA monitor, maybe on sale for around $145 at certain times.

If you’re on a tighter budget but still want a well-performing medium-sized monitor, the Sceptre E248W-19203R  is an excellent option. The metallic thin-bezel design provides a smooth viewing area, allowing for the side-by-side placement of two or more displays. The Sceptre is an acceptable option if you only need a cheap, stylish 24-inch display.

Even if you’re not expecting a ton of bells and whistles, this monitor lacks a fully adjustable stand and USB connections and inputs for DisplayPort. The Sceptre E248W-19203R fits comfortably inside your budget while providing full-colour reproduction and well-rendered grayscale performance.

Searching the market or online platforms for the best gaming monitor under $100? Those needing a monitor with an IPS screen, Full HD resolution, and AMD FreeSync up to 75Hz need to go no further than the Acer SB220Q. The monitor has extra special gaming capabilities and a sleek design with ultra-narrow bezels. Nothing beyond $100!… 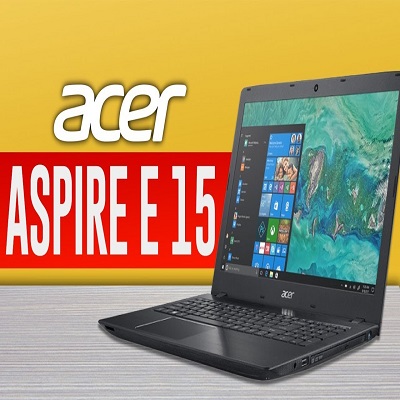 We discovered all the details when reviewing the widely available Acer Aspire E 15 laptop. Learn the reasons why you shouldn’t bother. Bottom Line There are better laptops for the same price as the Acer Aspire E 15, but it’s still a decent entry-level gaming laptop with good internals and battery life. Pros Cons If…