Want to know the comparison between Chromebook vs Laptop? What makes a Chromebook different from a regular laptop? Here’s a quick and easy explanation of all the key distinctions.

There is no doubt that computers have advanced dramatically during the previous two decades. In addition to the yearly increases in hardware power, quick technical improvements are also plain to see while examining modern laptops.

Modern ultra-portables are a vast improvement over the clunky, hefty laptops that were cutting-edge in the early 2000s. Also, a Chromebook is likely to be what you find if you’re looking for the lightest, most affordable laptop available.

And we hope that this guide about Chromebook vs Laptops will help answer some of your questions regarding these gadgets. What are they? How do they differ from regular laptops? What do you think? Are these a good buy? So, keep reading if you’re trying to decide between a Chromebook and a traditional laptop!

What Is A Chromebook?

Chromebooks are any portable computer, tablet, or 2-in-1 that uses Google’s Chrome OS. The first Chromebooks appeared in the early 2010s, and they can be seen as a natural progression from the netbook because they fill a similar market niche now occupied by tablets.

In light of the preceding, a Chromebook may look identical to a traditional laptop at first glance; the primary distinction lies in the operating system.

Chrome OS is a lightweight operating system based on Linux and relies extensively on the internet and cloud storage but is still less in size than Windows or macOS. As a result, it’s an OS more suited to mobile devices than desktop computers. It can run desktop Linux and Android apps from the Google Play Store.

Chromebook vs Laptop — Which Should I Get?

So, which should you buy: a Chromebook or a laptop? It would help if you considered the device’s primary function to determine the answer to that question.

Laptops running Windows or macOS are preferable to Chrome OS if you want to play PC games or use specific applications and professional tools like Adobe Premier or Microsoft Office.

A Chromebook, on the other hand, would be the better option if you use the device primarily for light chores like online browsing, casual gaming, or work that can be completed solely through the productivity tools offered on Chrome OS.

Of course, there are other considerations to take into account.

The longest-lasting issue is the battery life. Chromebooks have a substantially longer battery life than comparable Windows laptops since Chrome OS is so lightweight and Chromebooks often have low-power hardware. Because of this, you can take them everywhere without worrying about draining the battery too quickly.

While the Chromebook’s compact design is a boon to portability, the trade-off is a smaller screen due to the device’s overall size. This may be an issue if you need a larger viewing area for work or like watching videos on a bigger screen.

Last but not least, there’s the issue of where to put things. Because Chrome OS depends so heavily on the internet and cloud storage, Chromebooks typically have far less internal storage than traditional laptops. This may be a problem if you aren’t always connected to the internet or if you keep all your files on your local machine rather than employing an external hard drive or solid-state drive. You can also check our detailed article: What is the difference between SSD and HDD?

Generally speaking, we think Chromebooks are fantastic if you’re looking for a cheap and lightweight laptop with a simple and streamlined operating system that can be used for casual gaming and basic productivity tasks.

However, due to their low CPU and GPU performance and memory capacity, Chromebooks are not suitable for more demanding professional applications or serious gaming. Therefore, gaming laptops and MacBooks remain the best options if you require a computer capable of running PC games or video editing applications.

Although Google has recently added support for Windows apps on select Chromebooks, this is still not a feature widely available in Chrome OS computers.

There are also high-end Chromebooks, some of which can cost four figures. However, these can be difficult to market when pitted against high-end gaming laptops and MacBooks unless the item in question is a 2-in-1 with its unique benefits.

Now that we’ve covered about Chromebook vs Laptop, what differentiates laptops and Chromebooks, you should be able to make an informed decision based on your specific demands and available money. 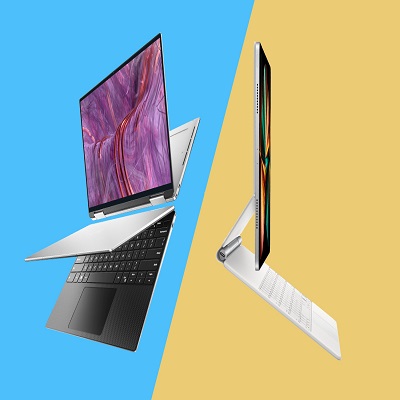 What’s better, a tablet or a 2-in-1 laptop? Can you tell me the pros and cons of using each one? To assist you in making a decision, here is the definitive guide about 2-in-1 Laptop vs Tablet. It seems like just yesterday that 2-in-1 devices like convertible laptops and tablets were the stuff of science…